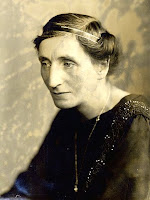 By en:Trans-Ocean News Service - National Library of Israel, Schwadron collection, CC BY 3.0, https://commons.wikimedia.org/w/index.php?curid=18378410
Alice Salomon was a German social reformer and the founder of social work as an academic discipline. She was born in Berlin on April 19, 1872, and died in New York City on August 30, 1948. Her contribution to German social work was so significant that the Deutsche Bundespost (German post office) produced a commemorative postage stamp in her honor in 1989. In Berlin, she has a university, a park, and a square named after her.
Alice Salomon, a Jewess who converted to Protestantism, was one of the first women to study economics in Berlin who later converted to Protestantism. Later, in 1908, she founded the Soziale Frauenschule, the first institution to provide professional social work training. Salomon drew on her volunteer work with the Mädchen- und Frauengruppen für soziale Hilfsarbeit (Girls and women's group for social unskilled labor) to accomplish this (1893).

The growth of social work in Europe was significantly influenced by Alice Salomon.

In the first half of the 20th century, Alice Salomon had a significant role in the growth of social work in Europe. Beginning with her feminist viewpoint, her influence had an effect on the peace movement, the social rights of women, and the appreciation of female professional work. She believed that caring for the impoverished is one area in which women may meaningfully perform paid employment, along with other members of the first wave of feminism. Women only had access to the concept of geistige Mütterlichkeit, often known as "social motherhood," as a resource for social care. Despite the fact that upper-class women may excel in social work, their upbringing did not always equip them for the practical components of the job. This necessitated the need for formal education that could combine emancipation, personal growth, and professional advancement. In this context, Salomon concentrated on a methodical approach to caring. She emphasized the value of treatment plans that are supported by research. She also pushed for "the art of helping," creatively utilizing a variety of sources of assistance. The goal was to alter the clients' conditions and attitudes.

After making a study trip to the United States in 1923–1924, Alice Salomon wrote Soziale Diagnose, her most significant work, in 1926. It was her interpretation of Mary Richmond's social diagnosis work from a European viewpoint. Salomon drew a very direct connection between care and pedagogical coaching. In this way, she and others started the social work and social pedagogy were intimately intertwined, which was a very German development.

Salomon was instrumental in establishing an international framework for the management of social work education.

Salomon was crucial in the development of an international system for organizing social work education. She continued to maintain a wide range of international relationships, including those with M. Mulle of the École Central du Service Social in Brussels in Belgium and M. Moltzer of the Amsterdam School of Social Work in the Netherlands. She also maintained relationships throughout the United States. The notion for an international organization of social work education was introduced by Moltzer in 1928. Together with Belgian social work pioneer René Sand, Salomon brought the concept to life. The International Committee on Schools of Social Work (ICSSW) was founded in Berlin in June 1929, with Alice Salomon serving as the inaugural chair. It was then renamed the International Association of Schools of Social Work (IASSW), which it still bears today.
In 1937, Alice Salomon compared more than a hundred different social work education settings across the globe. Despite the necessity to adapt social work to the local context, she came to the conclusion that there needed to be less variation in approaches and curricula. Salomon was driven out of Germany by the National Socialists in the same year. She immigrated to the USA, where she quickly developed a sense of isolation and loneliness. In August 1948, she passed away.