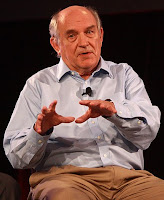 By Gage Skidmore
Political scientist Charles Alan Murray is from the United States. He is a W.H. Brady Scholar at the American Enterprise Institute in Washington, DC, a right-leaning think organization. The work of Murray is very divisive. He wrote about the American welfare system in his 1984 book Losing Ground: American Social Policy, 1950-1980. He and Richard Herrnstein co-authored the 1994 book The Bell Curve, in which they make the case that throughout the 20th century in American society, intelligence became a better predictor of many individual outcomes, such as income, job performance, unmarried pregnancies, and crime, and that social welfare programs and educational initiatives to improve social outcomes for the underprivileged are significant. The Bell Curve also asserted that IQ disparities, particularly those between average IQs of various races and ethnicities, were mostly hereditary in origin.
An review of social work's historical development gives insight on both the individuals and events that bolstered the profession as well as those that undermined it by making critical statements. It includes Charles Murray. Despite the fact that his name isn't usually mentioned in social work literature, it is nonetheless important to be familiar with his work because it has a significant impact on the political right and shapes their views when they discuss social work and the welfare state.

Charles Murray was born in 1943 in the American state Iowa. . He received a scholarship to study history at Harvard University because of his outstanding academic performance, and he then transferred to the nearby Massachusetts Institute of Technology to pursue a PhD in political science. After that, for six years, he took part in a mission for world peace in Thailand. His career as a scientist at various conservative think tanks didn't begin until much later. He began his career with the American Institutes for Research (1974–1981) before moving on to the Manhattan Institute (1981–1990) and eventually the neoconservative American Enterprise Institute.

Murray published his most famous book Losing ground in 1984

Murray's most well-known book, Losing Ground, was published in 1984. In it, he examined the social policy of the USA between 1950 and 1980—a time when welfare states grew and spread throughout the world. Murray questioned how it was possible that despite spending more money fighting poverty, the amount of poverty was still rising. How can this paradox be explained?
In order to highlight the main idea of his research, Murray utilized the hypothetical example of Harold and Phyllis, a young couple from Pennsylvania. When Phyllis gets pregnant, they talk about their options. Murray forces students to think about two alternate scenarios of the same issue. Harold would have started looking for a full-time job in 1960 and they would have gotten married. Due to the presence of a male in the home, Phyllis would not be eligible for any benefits, and Harold's unemployment benefit would not have been sufficient to support three people. But ten years later, in 1970, Harold and Phyllis would not only have tried to obtain an allowance, but they would also not have wed. The young couple found it much more appealing to rely on the welfare state than to go for employment and make their own money because of the high benefits and low requirements. Social work and the welfare state, according to Murray, became one of the causes of poverty by failing to penalize actions that contributed to it. The security net has changed into a hammock.
Murray became well-known as a result of his book Losing Ground, which also provided many welfare state critics with new justifications. Ten years later, Murray gained even more notoriety when he and Richard Hernstein published The bell curve. Here, their main point was that racial and genetic factors contributed to social inequality. They received harsh criticism for their effort.
More recently, Theodore Dalrymple published Life at the Bottom: the worldview that makes the underclass, which is a critique quite similar to Murray's (2001). His claim was that social work distracted people from their own obligations.