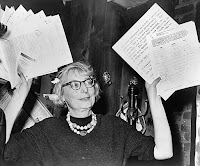 By Phil Stanziola
Urban studies, sociology, and economics were all impacted by the American-Canadian journalist, novelist, theorist, and activist Jane Jacobs (4 May 1916 – 25 April 2006). In The Death and Life of Great American Cities, which she wrote in 1961, she made the case that "urban renewal" and "slum clearance" were disrespectful of the interests of city residents.
In the latter part of the 20th century, Jane Jacobs  likely had the most impact on how we thought about cities and urban life. Her effect was unrestricted by her lack of formal education in city planning or similar fields. She relocated to Manhattan's Greenwich Village at a very young age, where she had to work many jobs to make ends meet during the recession. Long walks through the city filled the unemployed times. Her persuasive writing and keen analytical eye gained attention during that time. She began writing for Architectural Forum after being married to an architect. She grew quite interested in cities and city life as a result.

The death and life of great American cities, Jacobs' best-known book, was released in 1961. It was a demonstration against Robert Moses' egotistical ambitions for the metropolis of New York. To provide as much flexibility for car travel as possible, he sought to construct massive traffic gateways across the central city. A city does not expand like a living organism on a map, according to Jacobs, who was outraged about these conceptual blueprints. Streets are like the arteries in cities, which are like bodies. Jacobs and numerous others were able to halt construction of the Lower Manhattan Expressway through their writings and protest activities. She had fought Moses in a match and prevailed.

Jane Jacobs moved to Toronto in 1968

Jane Jacobs relocated to Toronto in 1968 as a form of protest against the Vietnam War and to spare her kids from mandatory military duty. She was supposed to remain in Toronto until her passing in 2006. In many ways, Toronto's predicament was similar to New York's. There were plans to extend the massive Spadina Expressway right through the heart of the city. Jacobs emerged as one of the most prominent opponents of these proposals, and once more she and her allies were successful in halting the development of this highway through further planning and opposition. Acknowledging the dominance of automobile transportation has progressively given way to an understanding that other modes of transportation are equally important and that car-free zones are advantageous for cities in many Western cities. Jacobs had a crucial part in this awakening.

We can recognize a few aspects of Jacobs' vision for the city in the way we think today. She claimed that the overall appeal of a neighborhood was largely dependent on the variety of local functions. When functions are spatially divided, neighborhoods that are only partially occupied result, such as those where people only go to shop, sleep, or work during certain hours. Jacobs suggested that mixing these functions together in one location would be ideal since it would promote constant activity. In connection with this, Jacobs developed the idea of "eyes on the street." Numerous individuals using the city at various times creates an informal social control that improves public safety. This idea was later developed and used by Robert Putnam in his work on social capital.
Jane Jacobs also popularized the notion that "new ideas must employ old buildings," but "old ideas can sometimes use new buildings." She was saying that giving ancient buildings a new use rather than demolishing them and building new ones is what city growth is all about. There are several instances, including the Tate Modern in London, which is housed in a former power plant.
To honor Jane Jacobs, many towns have put in place Jane's walks, which are guided city tours that concentrate on the goings-on in neighborhoods right now. These provide a glimpse of the contemporary city rather than the historic "dead" city. They are sometimes referred to as urban safaris.