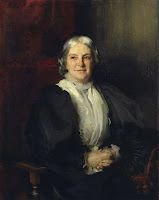 By John Singer Sargent - Church Times - For houses and green space, Public Domain, https://commons.wikimedia.org/w/index.php?curid=12810979
Octavia Hill (1838–1912) was an English social reformer who lived from 3 December 1838 to 13 August 1912; during the second half of the nineteenth century, her main focus was on the welfare of urban residents, particularly those in London. She was raised in difficult circumstances as a result of the failure of her father's businesses, despite being born into a family of radical thinkers and reformers who were passionate about eradicating poverty. She never attended a formal school but began working at the age of 14 to support the rights of workers.

Octavia Hill , a teacher and artist, began her career in the less affluent areas of late Victorian London in 1864. (in what is now the borough of Marylebone and nowadays one of the most expensive places to live). She worked with those at the bottom of the social scale: the underprivileged and jobless who resided in chilly and wet homes. Her main interest was housing. One of life's fundamental needs, according to Hill, is a clean, well-kept home with space, light, and air, as well as friendly neighbors. She purchased three homes in what is now central London using money given to her by the art critic John Ruskin. She personally collected the rent each week and spoke with the residents about their issues.
Her work was based on housing, but it also served as the springboard for other endeavors, such as the creation of gardens, playgrounds for the kids, and excursion planning. Octavia Hill chose to reside in the Marylebone neighborhood of London and constructed a sort of clubhouse behind her home to host events on the weekends and in the evenings for kids, ladies, and seniors.
Because of careful management, her home stock turned into a lucrative venture that provided a 5% return. Her house developments turned into lucrative investments. She increased the scope of her activities while accumulating more funding and assistance. Numerous women acquired training to take on a position akin to Hill's and become social workers. The strategy used by Octavia Hill and her coworkers was intended to increase the tenants' self-respect and confidence in their talents. Today, we would refer to this as resilience and empowerment. She detested charitable endeavors that foster reliance. She was a founder member of the Charity Organization Society, which was established in 1869 with the intention of modernizing social work in order to end poverty. It has German Elberfeld as its birthplace.

Octavia Hill started her fight to preserve the local environment in and around London a few years later, in 1875. She later assisted in creating the National Trust in 1894. The organization continues to play a significant part in the UK's landscape, parks, and stately residences. Initiatives in Chicago, Amsterdam, and Berlin are just a few of the places where Octavia Hill has had a significant impact. Her views have been popularized over the world thanks to her 1883 publication The Houses of the London Poor.
Because she prioritized individualized and small-scale social work, interest in her method of working waned toward the end of her life. Hill hesitated to concede that extensive government intervention might be required to address pressing social issues including unemployment, housing insecurity, and poverty. She firmly believed that government programs should never take the place of private action, and as a result, her popularity declined as the welfare state began to take shape. It is hardly surprising that there is once more an increasing interest in Hill's work and thought given the current discussions regarding the purposes and viability of the welfare state.

Octavia Hill is importance in the history of social work

Octavia Hill is important in the history of social work because she turned down charitable donations. Her goal was to offer assistance without soliciting alms because she believed that handouts were often disliked and kept people on the periphery of poverty. However, Hill's strategy could be characterized as paternalistic because it sought to alter the attitudes and routines of the underprivileged. As she previously stated: “The people’s homes are bad, partly because they are badly built and arranged, they are tenfold worse because the tenants’ habits and lives are what they are. Transplant them tomorrow to healthy and commodious homes and they would pollute and destroy them” (1875).
Hill's method undoubtedly had its roots in the beliefs and experiences of the well-intentioned middle classes, even if it is often credited with founding the field of social work and revolutionizing the delivery of social housing.