Concept,meaning and definition of Social Group 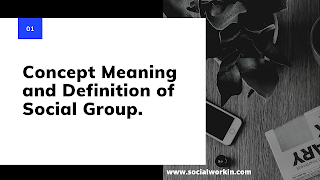 Once Aristotle has said that Man is a social animal. Man can’t live alone without the fellowship of others. It is universally true that Man is born in a group that is known as a family and become a part of the group (peer group). Gradually he develops so many relationships around him and become one of the members of a larger group that is known as society. The journey of human’s life starts from being in the group and progress with the group. Our lives are influenced and moulded by the group living experience. Our social life is being enhanced and functioned by the group. Social life and social relationship of a person begins when he or she becomes part of any group. Many understood group work is teamwork. It is very often represented as a distribution of work responsibility or dividing the work among the members for productivity. To understand the concept lets read the following.

It is apparently very surprised to understand how the group is always been an important factor in shaping and moulding the growth and development of every personality. Group are a fundamental part of every human experience. They allow people to develop a large and complex activity for socialization and education and provide a platform for the relationship to form and grow and where people can find help and support. Have you ever tried to understand how does a group functions and being administered? In this chapter, we shall gain to understand what is social group and its characteristics in details. Ask yourself the following questions before jumping into the understanding of the group.
I am sure that you have started thinking about this question. This questions will cultivate many ideas and concept to know about the science of group. Till now we see what a group is meant for an individual’s life. To understand the science and geography of a group it is essential to know the following.

Technically, not every collection of individuals are regarded or considered as a group. To understand these notions let’s refer to the  Oxford Dictionary, it says “a  number of persons or things regarded as forming a unit, on account of any kind of mutual or common relations, or classified together on account of a common degree of similarities. According to this dictionary, it defines the group with the following term.
To understand the group more accurately, let’s examine some more definition and different perspective. According to Mujer Sherif  “ A group has to be a social unit consisting of a number of individuals interacting with each other based on certain elements.
If we tried to see the important components in his definition we may understand what a group is meant to us. Let’s draw the features of the group.
From the analysis of the group definition, we reach to the conclusion that all the features can constitute a true sense of group.

The prime characteristics of the group are the collection of persons. When more than one person coming together for a particular purpose there a sense of group evolves. group cant be formed without a collection of individuals

It is the members who define themselves and being defined by others as they belong to a group. There should be a continuous interaction to make the group alive and vibrant. The group member should develop a perception that they belong to the group and the group belongs to the theme.

The group may be defined as a collection of individuals who become part of each other and work together to achieve some common goals. A definite goal can keep group member to engage in achieving the goals. Without the goal, true sense of group meaning will be missed out.

As we know that a group is understood as a collection of persons who are trying to meet their requirement by associating with each other. It is apparent that a member of a group is continuously progressed by motivating each other.


8-Structure of the Group

The structure of the group involves group norms, principles, and roles that emerge over time. Roles involve the performances of individuals according to their roles and responsibility. Hence social structure is an important part of the social group.