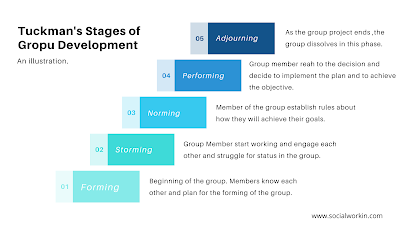 Every five stages involve two aspects of interpersonal relationship and task behavior. In the initial stage, the group's member learns each other as they are new to the group and very much unaware about the purpose, objectives of the group and each one of them is found to be less effective and uncommitted. In the second stage (storming ) members of the group, while working, they disagree with each other and it results in a lack of cohesion, violation, and confrontation. Gradually in the third stage of the process (Norming), the group members establish rules and accept it in order to achieve the objective of the group, the member starts doing an activity like questionings, performing, reviewing, and identify strength and weakness. In the fourth stage (Performing ) member reaches the conclusion and try to implement the solution through their creativity, flexibility, and exhibits open relationship. In the final stage (Adjourning ) When the project of the group ends, automatically the group tends to be disbanded. 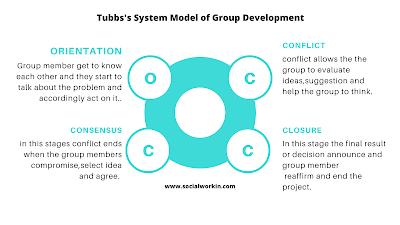 Similarly, when we look at the Tubbs system model we get to know about four stages of group development. As we see in the above illustration that, in the orientation phase the group member gets to know each other and understand the problem and consciously understand the limitation of the problem. Gradually, in the stage of conflict group member examine the idea and shows their conformity. In the last stage of Tubbs's model, the decision or the result is announced and the group member shows the support to it for the accomplishment of the goal of the group.

However, the first study on the stage of group development carried out by Kurt Lewin who propounded and introduced the term Group Dynamic. His model describes various changes that appear through the three-stage as  Unfreezing, Change, and Freezing. According to this model the group member trie to overcome inactiveness and dismantle the set of mind. In the second stage, the changes appear in the typical period and in the confusing transition. In the last stage of the Kurt Lewin Model, the mindset of the group member become definite and returning to the previous level. Now on the basis of the classification of many experts, we may conclude the stage of group development in a simple and precise

States of group development and its analysis

In the first stage, it includes the planning and forming of the group. Individuals join a group to seek opportunities for self-expression and to fulfill individual and social needs. In the first stage, the process has been comprised of the efforts of social group workers to concentrate on planning and the formation of the group. Before forming a group a group worker must study the following.
This above information will help the group worker to form an ideal group on some common ground. Generally "Groups" in India are conceived and formed by the organization and agencies. Normally, people do not tend to be part of or initiate such initiative. Therefore, the social group work has to plan out keeping in mind how the complete formation of the group be accomplished and how to respond to the result arising out of the group.

At this stage, the group appears to be more in the form of a constellation of individuals than an organized group entity. In the initial moment of this stage the members of the group experience low group consciousness. Since the members are unknown to each other they tend to exhibit shyness, fear,  inactive in the group, hesitation and some member may feel insecure and nervous. However, these phases gradually lead to the development of a sense of  "We feeling" among the members. The following are the steps involved in these phases.
The failures and successes of the group work are depending on this stage. The role of the worker is to introduce the members of the group and helping the group member to become and take an active part of the group. It is also necessary for the worker to prepare the profile of the members, giving their details as family background, interest habit, level of confidence, physical characteristics, and etc.the To engage the group's members in programs the worker is required to formulate goals or specific objective. The objective is nothing but a statement of what the group worker is trying to achieve through the group work process. When the group is ready and about to settle down the member must now be played roles and responsibility. A systematic functional organization must emerge at this stage. A group has to assign and delegates responsibility and develop the way of making members participate in the process of planning, execution, and evaluation.

The importance and focus of this stage are to keep the provision of program experience and develop the opportunity for adjustment, growth and facilitate holistic development of the members. The nature of the program may depend on the purpose of the group. This phase is considered to be very crucial as the group member start taking the group seriously. The group may now be on the way to achieving its goals. Planning, organizing developing of the program, and its execution are the important features of this stage. The following are the steps in the stage.

Programs are the collection and series of activities designed on the basis of interest and needs of the members of the group. The program should evolve from simple to complex and supplementing results of group growth, development and ability of the members. The group worker should monitor the program activity. And it can be monitored on the basis of such indicators such as the pattern of interaction, emotional integration, and self-development.

Once the implementation of program planning is over, the group must get ready to introspect and get ready to evaluate the outcomes of the result that come out from the continuous group effort in an objective manner. Evaluation is the part of a social group worker to measure the progress of individuals along with the overall functions of the group in relation to the group objectives. The center of the evaluation should be the growth of the individual, the content of the program planning and the performance of the worker and these three important factors influence the entire objective of the group work collectively. The following aspect should be taken into account while evaluating group work.


The following indicators need to see for The evaluation of group development.

Every group is deemed to end on a positive note. When group objectives are said to have achieved the worker should ensure the process of smooth closures. Some experts view that the end of the group has to be made in a planned manner. Towards the end of the social group work process, the worker has to help and guide the member to face the challenge to overcome the vacuum the terminate stage may result in. At this stage, the worker has to make sure to share the evaluation status, success in achieving group goals, and allowing a member to express their feeling, experience, and accomplishment.
Post a Comment
Labels#Social Group Work
Share
Newer
Older