Meaning defination and causes of disabilities 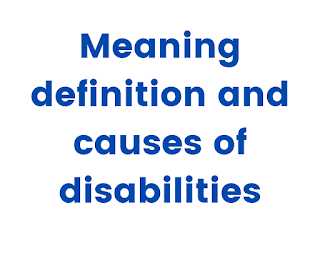 There are many types of disabilities, such as those that affect a person’s:

according to the World Health Organization, disability has three dimensions:1

What is an intellectual disability?

·         An intellectual disability describes someone who has a below-average intelligence quotient (IQ) and who lacks the skills needed for daily living. This condition is often formerly known as, “mental retardation.” This term has been widely rejected by most individuals and is rarely used anymore because of the shameful manner in which it was often used.

·         Children with intellectual disabilities can have a mild or severe case. Children with mild cases can gain independence with teaching and support programs and resources. More severe cases require more one-on-one support in school and at home.

Physical disabilities may affect, either temporarily or permanently, a person’s physical capacity and/or mobility.

There are may different causes of physical disabilities but they can include inherited or genetic disorders, serious illnesses, and injury.

Acquired brain injuries are due to damage that happens to the brain after birth. They can be caused through a wide range of factors including a blow to the head, stroke, alcohol or drugs, infection, disease such as AIDs or cancer, or a lack of oxygen.

It is common for many people with a brain injury to have trouble processing information, planning, and solving problems. They may also experience changes to their behaviour and personality, physical and sensory abilities, or thinking and learning.

The effects of brain injuries and the disabilities they cause can be temporary or permanent.

The spinal cord can become injured if too much pressure is applied and/or if the blood and oxygen supply to the spinal cord is cut. When the spinal cord has been damaged, it leads to a loss of function such as mobility or feeling.

As well as affecting the ability to move through paralysis, it may affect many areas of a person’s body – such as the cardiovascular and respiratory systems, bladder and bowel function, temperature, and sensory abilities.

Causes of the disabled

It is not possible to prevent all impairments. Some babies form differently inside the womb and no one knows why.

But many disabilities in babies are caused by harmful conditions of women's lives. If women can get enough nutritious food to eat, can protect themselves from work with toxic chemicals, and can get good health care, including care at the time of childbirth, then many disabilities could be prevented

Poverty is one of the biggest causes of disability. Poor people are most vulnerable to disability because they are forced to live and work in unsafe environments with poor sanitation, crowded living conditions, and with little access to education, clean water, or enough good food. This makes diseases such as tuberculosis and polio--and the severe disabilities they cause-- much more common because diseases get passed from one person to another more easily

In today's wars, more civilians than soldiers are killed or disabled, and most of them are women and children. Explosions cause people to become deaf, blind, and lose their limbs, as well as causing other injuries. Their mental health is also badly affected by the violence. The destruction of homes, schools, health centers, and means of livelihood that results from conflicts and wars leads to increased disability, poverty, and disease.

Many people have suffered after being exposed to massive amounts of radiation. This happened after accidents in nuclear power plants at Three Mile Island in the USA in 1979, and at Chernobyl in the Ukraine in 1986. And it also happened when the USA dropped nuclear bombs on Japan in 1945. These incidents caused widespread destruction and death from exposure to radiation.

When used correctly, certain injected medicines, like some vaccinations, are important to protect health and prevent disability. However, there is a worldwide epidemic of unnecessary injections. Each year these unnecessary injections sicken, kill, or disable millions of persons, especially childre