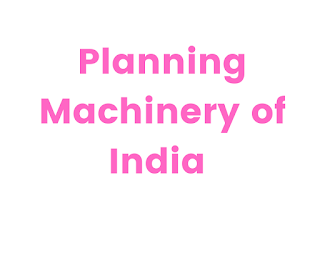 1.     The Planning Commission of India is responsible for the planning process of the country but it has no sanction of its own, it is basically a non-political advisory body. The Commission has full-time members and their number has varied from time-to-time. Many a time Union ministers are appointed to Commission as part time members. While the Prime Minister is the Chairman of the Commission, it has a Deputy Chairman, three to eight full members, and a member-Secretary.

3.      The role of the Planning Commission includes assessment of the material, capital and human resources of the country and possibility of augmenting them and ensuring their optimum utilization. The Commission formulates five-year plans and annual plans based on them and decides the priorities of the planning process.

4.      The Planning Commission is also responsible to ensure proper conditions for successful execution of its plans and to determine the nature of machinery required for implementation at various stages. The. Commission undertakes time-to-time appraisal of the progress and suggests necessary changes. As and when required the Commission should make interim or ancillary recommendations.

5.  According to the Government of India Allocation of Business Rules, the Planning Commission has been assigned the responsibilities of Hill Area Development. Program, Directorate Planning, National Informatics Center (NIC) steps to ensure public cooperation in national development.

1.      Planning gives expression to the idea of intervention and it is a central notion in social development. Advocates of planning contend that social and economic processes can be directed through rational intervention to improve society.

2.      The process of social development is not like the inherent process of social change that is continuously taking place in every living community. Rather, it is the result of conscious and deliberate intervention with the instruments of policy and planning to bring about a non-random change towards the desired goal(s).

3.      The dictionary meaning of word ‘development’ is the act or process of growth to more advanced or mature state of condition. Development is considered as referring to economic aspects alone.

4.      In order to see the relevance of social aspect of development one has to go back to history. In the wake of industrialization in Europe and in India too, came the accelerated urbanization of unprecedented scale. With it also came overcrowding, slums, rural urban migration, social and occupational mobility, some degree of social breakdown, crime, delinquency and organized commercial vice. T

5.      his is a familiar story, so familiar in fact that some amount of social disorganisation came to be regarded almost as natural and, therefore, inevitable concomitant of development

Role of planning machinery of India

1.      Planning Commission The Planning Commission is the technical body for facilitating the planning process in India. It was set up by the Government in March 1950. Its chief function is to make an assessment of the material, capital and human resources of the country, including technical personnel and investigate the possibilities of augmenting these resources that are found to be deficient in relation to the nation’s requirements.

2.      The Planning Commission performs its role as an advisory body functioning at the highest policy level without further being involved in the responsibilities of day-to-day administration. The prime minister is the Chairman of Planning Commission. Within the general organisation of planning commission, the Programmed Evaluation Organisation (PEO) has functioned since 1952 as an ancillary agency.

3.      It undertakes evaluation studies to assess the impact of selected Plan and programs in order to provide feedback to the planners and implementing agencies.

4.      National Development Council Under the constitution, the subject of economic and social planning is in the concurrent list as this is a subject in which the Centre as well as the states are interested and have to work in unison. The coordination of policies between the two integrating structures of the federal set-up is brought about through a process of mutual consultation.

5.      The system of consultation in the formulation of policies on the basis of overall the national requirement is the central point of planning in the country. The National Development Council is the highest policy-making body that provides the opportunity for plans to be formulated and implemented throughout the the country as a unified development effort

6.      iii) State Level Planning As in the center, so also in the states, a number of organizations and departments are involved in the planning process.: