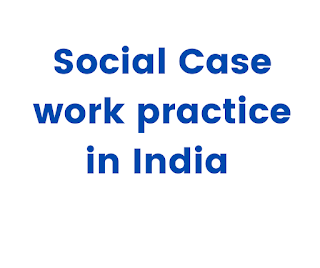 It is believed that an individual does not have a right to express himself/ herself, to decide upon an action he/she will like to undertake or which he/she is capable of undertaking. In Indian society the individual remains, more or less, a participating member bound to his/her original group.

Indian tradition does not primarily seem to subscribe to the concept of right.  The concept of duty to one’s fellow beings has run through ages.  In his/her relation to the rest of the society, the Indian scheme lays stress upon his/her duties – dharma by which he/she is to secure his/her own advancement and thus he/she may be distinguished from his/her western counterpart who emphasizes his/her rights.  Although, one implies the other, right emphasizes power and comforts for the physical self, and duty emphasizes debts which a person owes to all conscious beings.

In India, the caseworker has to perform a two-fold role: on one hand, s/he has to handle traditional casework situations, where the individual’s adjustment to his/ her reality is disturbed due to internal or external strains.  On the other, the case worker’s role is to help an individual to reach a new level of integration by introducing new ideas and new ways of living.  The caseworker should not be confined to help the client to adjust to the existing reality but also to become an active partner in the process of change for the betterment of society as well
In the Indian context, the concept of self fulfillment and self-expression go hand in hand with the concept of conformity to the group norm.  In Indian society, the individual remains, more or less, a participating member bound to his/her original group.  Indian tradition does not primarily seem to subscribe to the concept of right. In the practice of social casework, time and again, one sees that the needs of the clients are not limited to their material wants only.   The emotional needs can be
met only if one focuses on the concept of duty. Society always encourages individuals, families, and communities to take a genuine interest in the life of people who are old, sick, infirm, disadvantaged, and vulnerable. In the Indian culture, social caseworker often has to work towards enabling the client and the members of his/her family to understand their intrinsic dignity as human beings and act accordingly.
The caseworker has to enable the individual to discharge his/her duties and help his/her family members or society to grapple with new ideas and thinking that will ultimately benefit them.
References
Post a Comment
Labels#social case work
Share
Newer
Older