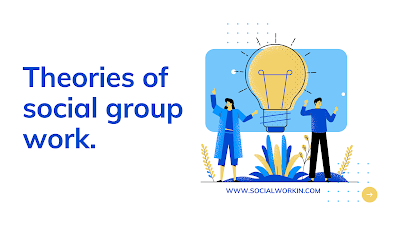 Content
Introduction
Social group work is a method of social work and based on the concept of man as a social animal and constantly developing human beings by making continuous significant interaction with another man. Social group work is a practice-based approach which practice, facilitate and develop the personality of the individual through guided group interaction. Understanding group dynamics and behavior is much indispensable and has the utmost importance in group work. To understand the complexity and dynamics of the group it is essential to understand the theoretical foundation of the group work. Let us discuss the same in the below.
Also read:-


The theory is known to be.scientifically accepted general principles or body of factor knowledge offer to explain the phenomenon. In the context of the group work theories are scientifically accepted fact and statement for a comprehensive understanding of the individual's behavior and relationship with another fellow being. The group work has developed into a complete part of the social work from the various theoretical foundations. As the theories are borrowed from different disciplined for understanding individuals and group behavior.

Psychoanalytical theory (Freud-1922)has greatly influenced social group work. And this theory perhaps one of the earliest studies to provide an adequate explanation of human personality. The theory has been conceptualized that the human mind is governed by two broad systems.

It attempted to explain that the mind is composed of thought (Idea) feeling, drives, conflict, and motives. Describing the theory Freud explains here that Id is primitive psychic force is hidden in the unconscious level and represent basic need and drives such as hunger, thirst, sex, and self-actualization. It is completely governed by the pleasure principles of motivation. While the other hand Ego works as a rational component that controls and regulates the thinking process of the mind. And Super-Ego represents consciousness as it serves as the conscience by indicating what is right and wrong. On this front it tried to says how the individuals are controlled and regulated by the group living. The psychoanalytical theory has been adopted and modified the classical psychoanalytical theory to emphasize the experience of group interaction.

He is one of the noted theorists of many who study group functioning scientifically. He highlighted different forces which influence the group. In order to understand the leadership style, he and his colleagues created groups and different styles to see the impact on the functioning of the group. In the Field l Theory, he argued that a group has a living space and it has movement. It attempts to accomplish group tasks and goals by facing hurdles in the movement.

Lewin introduced several concepts of helping in understanding force in social group work as they are:-
The group worker using the theoretical framework can design their own intervention in working with the groups for achieving the group goals with the development of the individuals.

To understand the functioning of the group, a System Theory is very helpful in this regard. The theory tries to define it as a social system and set of interdependent elements trying to function as a unified whole to maintain order and stable equilibrium. The social systems are constantly facing continuous challenges in the internal environment and outside of the environment as well. The group is looked upon as a system therefore achieve its objective if it is able to carry out functions as 1-Integration 2-Adoption-3-Maintenance-4-Goal attainment.

Exchange theory explains the entire process of exchange and transaction of giving and receiving. The theory is focused on the maximization of benefits and minimizes cost. Homans(1961) and Blau(1964) have developed an exchange theory to explain the behavior of the member within the group//In their argument, it is stated that the individuals try to maximize individual reward and minimize punishment. All human being interaction is according to expectations and desire to get from others in returns. Social behavior is an exchange of material and non-materials. such as approval or prestige. A person tries to give others and get something in return. This process tries to balance the exchanges.