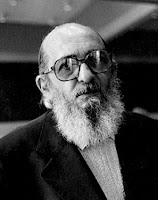 By Slobodan Dimitrov - Own work, CC BY-SA 3.0, https://commons.wikimedia.org/w/index.php?curid=5326164
Brazilian educator and philosopher Paulo Reglus Neves Freire (19 September 1921 – 2 May 1997) was a strong proponent of critical pedagogy. According to Google Scholar, his famous book Pedagogy of the Oppressed, which is widely regarded as one of the founding texts of the critical pedagogy movement, was the third most cited book in the social sciences as of 2016.

A middle-class family welcomed Freire into the world on September 19, 1921 in Recife, the state capital of Pernambuco in northeastern Brazil. Because of the Great Depression, he was exposed to hardship and hunger at a young age. His family relocated in 1931 to Jaboato dos Guararapes, 18 kilometers to the west of Recife, because it was more affordable. His dad passed away on October 31, 1934.

In his well-known work Pedagogy of the Oppressed, Paulo Freire  explains the majority of his most important concepts. This was first published in 1968 (in Portuguese, with the first English version appearing in 1970), but it has since been reprinted, translated, and used as a source of inspiration by social workers all around the world. Freire was dedicated to giving the underprivileged a voice, and his thoughts on education were designed to increase political consciousness. In addition to being useful in his native Brazil, his methods of critical discourse and consciousness-raising are extensively employed by a generation of social and development professionals working in impoverished neighborhoods in both wealthy and poor nations.

Freire developed his thinking during a long career teaching Portuguese

Throughout a lengthy career teaching Portuguese in secondary schools and literacy programs, Freire evolved his thinking. Later, in the Brazilian state of Pernambuco, he was named director of the Department of Education and Culture of the Social Service. Here, he first began assisting poor, illiterate people. Because of his outstanding performance, he was given the opportunity to lead the country's literacy initiative. He planned to acquire 35,000 slide projectors from Poland in order to launch 20,000 cultural learning circles around Brazil. Sadly, after a military takeover in April 1964, Freire was forced to leave Brazil after serving a brief sentence for being a traitor. Before being given the opportunity to become a visiting professor at Harvard University in 1969, he relocated to Bolivia and Chile and worked for the United Nations.

Paulo Freire held a strong disapproval of conventional formal educational methods, which he claimed led to dependency in much the same way as a business bank. Students are handled as though they were unfilled bank accounts that the teacher could deposit money into. According to this "banking view" of education, "those who consider themselves informed bestow information upon others whom they regard to know nothing." The teacher speaks, and the students listen, creating a dichotomy between them. Both are thereby rendered unhuman. Ivan Illich's critique of traditional education, which he elaborated in the book Deschooling Society, is comparable to Freire's examination of it (1971)

Freire asserted that education can never be neutral

Education, according to Freire, can never be impartial. Either it serves to strengthen and liberate people, or it serves to subjugate and weaken them. Education requires new relationships between teachers and students as well as with society in order to avoid serving as an instrument of oppression. The educational approach makes a difference rather than the curriculum's contents or the teacher's enthusiasm. He discovered that if learning to read and write helped people understand the power networks they are subject to, it increased their motivation to do so. Freire advised educators to recognize and include politically significant terms, which he referred to as "generative themes" since they sparked debate.
Conscientization, or the processes through which people and communities gain a critical grasp of their social reality through contemplation and action, is a crucial idea in Freire's philosophy. This entails analyzing the underlying reasons of oppression as they are felt in the present and taking appropriate action. This involves more than just learning the fundamentals of reading and writing. It is essential to breaking the silence culture, which keeps tyranny hidden and unmentioned. Freire distinguished three degrees of political awareness: magical consciousness, naive consciousness, and critical consciousness in what he called the "archaeology of consciousness." It was the responsibility of the educator to promote a discussion and emancipation process that would help people develop critical consciousness. Here, we can clearly see the connection between Freire's work and the idea that underpins social work: empowerment