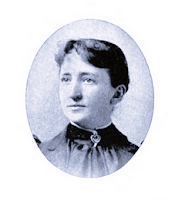 By May Wright Sewall - Sewall, May Wright (1894) domain The World&#039;s Congress of Representative Women
Mary Ellen Richmond (1861-1928) was a pioneer in American social work. Along with Jane Addams, she is considered as the mother of professional social work. She developed the first approach of social work, social case work, and was herself a Caseworker.
Mary Ellen Richmond laid the groundwork for the scientific approach development of professional social work with her 1917 book Social Diagnosis. She looked into the reasons of poverty and social exclusion in the interactions between people and their surroundings. Mary Richmond is known as the "Mother of Social Casework."

Richmond grew up on the American east coast near Baltimore. She became an orphan when she was four years old. She was a bright young lady reared by her feminist grandmother. After working at a bookstore for eight years, she spent the remainder of her life from 1889 to modernizing and professionalizing poor care. She began her work with the Charity Organisation Society (COS) in Baltimore, a US branch of the organization founded by Octavia Hill in the United Kingdom. Richmond's abilities were noticed, and she was quickly offered a leadership role in COS in Baltimore and Philadelphia. She was the director of the charitable section of the Russell Sage Foundation in New York, a significant fund that supports social science research, from 1909 until her death.

It was Richmond who systematically developed the content and methodology of diagnosis.

Almost everyone in modern social work agrees that diagnosis and research must take place before care can be provided. In the period about 1910, Richmond was the one who methodically created the content and methodology of diagnosis. Her first premise was that care must be directed toward the individual in her or his condition. She coined the term "social diagnosis" after conducting significant research. Her renowned circle diagram depicted the relationship between customer and environment. Richmond recognized six sources of power available to clients and their social workers: sources within the household, in the client's person, in the neighborhood and wider social network, in civil agencies, and in private and public agencies. This is a forerunner of the system theory that was so popular in social work in the 1970s.

Richmond's research technique provided social work clients a voice for the first time. In this way, she pioneered a new and fruitful field of social research that has since become a cornerstone of social work. Richmond elevated social casework to a professional level by providing detailed instructions on how to acquire information, conduct interviews, make contact, and conduct dialogues.
What is social casework? is her second major publication. Mary Richmond pioneered the 'learning from cases' concept in 1922. She provided detailed feedback on six meticulously documented practice situations. Her new request was to include psychological aspects as well. But first came direct and honest dialogue with clients, free of burdensome formalities. Strengthening clients' resilience is a natural component of this approach. Even a century later, Richmond's urge to involve consumers in issue solutions remains inspiring.
Mary Richmond's work had a huge impact in the United States, the United Kingdom, and around the world. Few countries' present social work has not been inspired by her work and ideas.